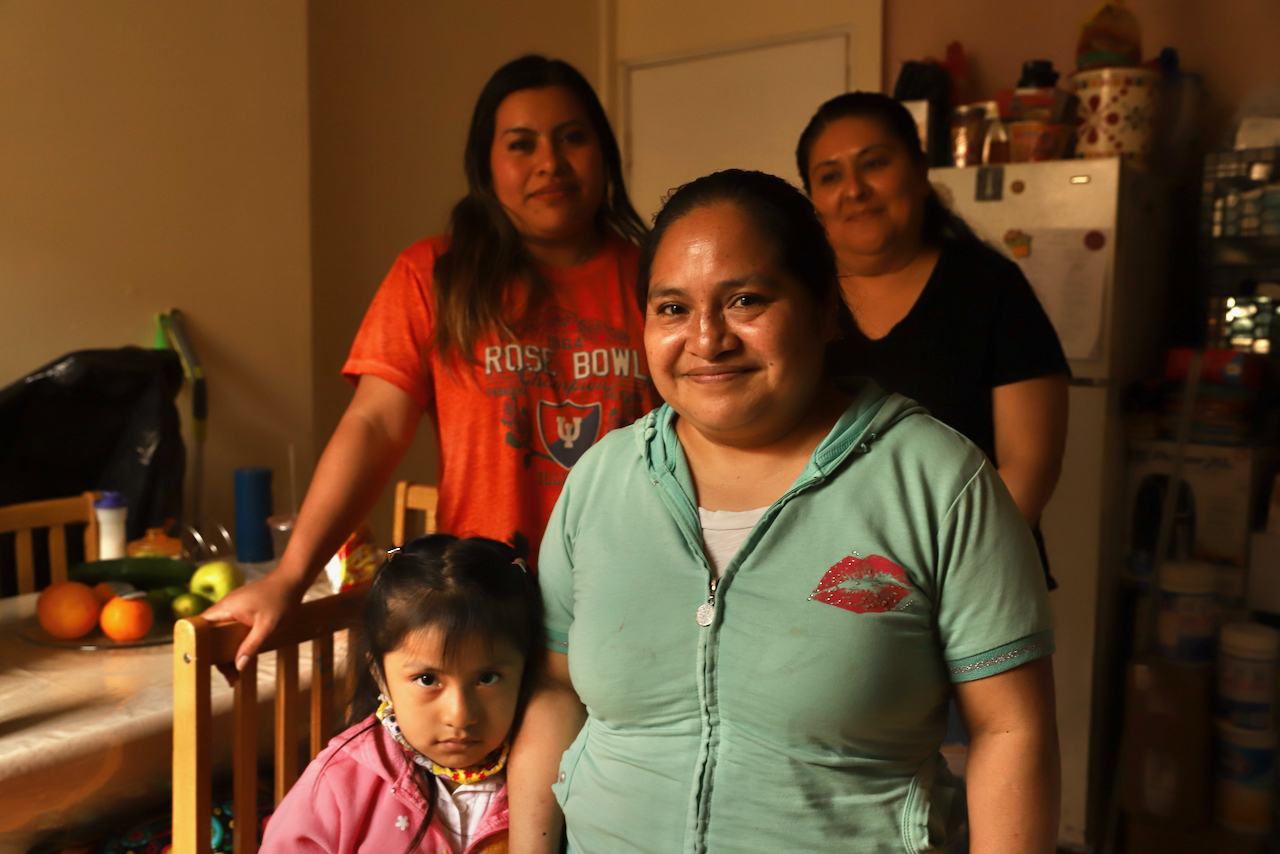 On a rainy afternoon in late June 2020, the residents of 387 E. 138th Street in Mott Haven were down on their luck. Outside on the wet streets, economic life had ground to a halt amid the first deadly wave of COVID-19. Inside, residents had just received some damning news: the new owner of their 10-unit building, one of the Bronx’s most notorious landlords, wanted to double their rent and was going to evict them in three months if they refused to pay.

Ericelda Hernández, who has lived at the address for 17 years, was just coming in from the rain when she met two young men outside the building. The duo, Aldo Reséndiz and Manny Pardilla, identified themselves as organizers from the South Bronx Tenants Movement, a housing activism group. They made small talk in Spanish.

Hernández told the men that she and most of her neighbors had been laid off, and that she had no idea how she could pay her new rent of $2,500. Another tenant, Maricela Catalán, came out and joined the conversation. She said the landlord had already forced her out of her apartment, into a smaller and less desirable unit he owned in the East Bronx.

The men told the women that they had certain rights as tenants, and could fight their evictions in court. They offered a suggestion: Why not band together with their neighbors to form a tenants association?

“Meeting Aldo, we saw a light at the end of the tunnel,” Hernández recalled recently, sitting below a statue of the Virgin of Guadalupe in her crowded living room, during the tenant association’s 20th meeting. “Forming the tenants association, we started to learn what kind of rights we had. We used to see ourselves as little, like ants. Now we know that we shouldn’t be afraid.”

In the two years since the association formed, most residents have been able to stay in their apartments. They are now finalizing new two-year leases, which they negotiated collectively. The new leases have much more modest rent increases, and their latest landlord has agreed to make certain repairs, the tenants say.

“Forming the tenants association, we started to learn what kind of rights we had. We used to see ourselves as little, like ants. Now we know that we shouldn’t be afraid.”

The South Bronx Tenants Movement, the organization supporting the residents, was formed by several volunteers, including Pardilla, in February 2017. So far, it has helped tenants form associations in about 10 buildings. Five of the groups are still active. Through the associations, tenants collectively advocate on issues ranging from rent to repairs to eviction attempts.

In the South Bronx, the stresses of tenant life can be particularly acute. Some landlords let their buildings run into disrepair. Heat and hot water complaints, which are recorded in the city’s 311 database, can serve as a proxy for landlord neglect. The database logged 142 heat and hot water complaints per 1,000 renter-occupied units from the South Bronx in 2021 – nearly seven times the citywide average.

The Bronx also leads the city’s five boroughs in eviction rates, which have been climbing since the state’s eviction moratorium — imposed during the pandemic — expired in January. About 10,000 new eviction actions were filed in the Bronx between January and April, including 1,377 in Mott Haven, Port Morris, Melrose, Longwood, and Hunts Point, according to Eviction Lab, a group that tracks housing-related data.

That rate is still lower than pre-pandemic levels, but a large backlog of cases filed during the eviction moratorium looms. Low-income tenants are guaranteed free representation in housing court, but legal aid agencies have been struggling to provide assistance given the case volume.

Recent immigrants often face extra hurdles as renters. Navigating the legalese of rental contracts can be difficult for anyone, but especially for non-native English speakers, who are often unaware of their rights under city and state laws. Meanwhile, many undocumented people fear that if they challenge their landlords over repairs or evictions, the landlord could report them to immigration authorities.

Rather than waiting for the landlord to file a court case against them, some immigrants self-evict, according to organizers — a phenomenon that is not reflected in official city statistics about evictions.

While landlords who illegally evict tenants can be punished with hefty fines, police often fail to arrest landlords who break the law. A recent investigation by THE CITY found that the NYPD rarely arrested landlords for illegal lockouts.

After the residents at 387 E. 138th formed a tenant association in the summer of 2020, they began researching their new landlord, Sam Applegrad, who had bought their building that March. He was notorious for evicting tenants in his buildings across the city — in 2019, he sued 1,707 families for eviction, according to the Right to Counsel NYC Coalition.

By the time Applegrad filed eviction cases against the residents of the 138th Street building in October 2020, a federal eviction moratorium was in place. However, it was initially unclear whether the moratorium would provide protection because Applegrad had filed the cases as “holdover evictions” — a special category used when a tenant’s lease ends, or a tenant lacks a lease.

At first, it seemed as if the tenants’ efforts were going nowhere.

The eviction cases lingered in court, and Applegrad installed new security cameras, which the tenants felt were meant to intimidate them. The cameras were mounted by a company named Homeland Surveillance, which plastered a large sticker of its logo — nearly identical to the Department of Homeland Security seal — over the building’s front entrance.

Take Root Justice also helped association member Catalán sue Applegrad. She testified that Applegrad’s employees had harassed her and forced her out of her home in May 2020, before the tenant association was created and before she knew her rights under the eviction moratorium.

Applegrad gave her a lease in another building he owns on Allerton Avenue in the East Bronx, but it is far from Catalán’s daughters’ elementary school and she says the conditions are poor. Applegrad denied that he had forced Catalán to relocate under duress, and ultimately, the court sided with him.

Despite these setbacks, the tenants association made gradual headway. Most tenants applied for, and received, funds from the Emergency Rental Assistance Program in late 2021. After that, they decided to withhold rent to pressure the landlord to make needed repairs to their apartments. In late December 2021, they learned that Applegrad had sold the building to a new owner.

Hernandez said she believes Applegrad sold the building because of the association’s organizing and Catalán’s litigation.

“Maricela was in court against him for a year, and then we were withholding rent. So it was not a good deal for him,” said Hernandez.

The Mott Haven Herald reached out to Applegrad by email but received no response. When we called his company, YMY Acquisitions, we were told that no one could be made available to answer questions.

The tenants association  met with the new landlord and negotiated leases they say raises rents only modestly, with each household receiving the same percentage increase. The tenants have agreed to pay rent arrears, and they say that the landlord has agreed to make needed repairs. The tenants said they have signed the leases and are currently waiting for the landlord to return it with his signature.

Magaly Herrera, one of the residents, said she would encourage other buildings in the neighborhood to form their own tenants associations. She noted the importance of staying organized and holding meetings on a regular basis, even though it can be difficult to find time to attend.

“We take time to make it to the meetings, and to be consistent and persistent, and we’ve achieved something,” she said. “As the saying goes, ‘There is strength in numbers.’”

In April, Mayor Eric Adams’ administration sued South Bronx landlord Moshe Piller over numerous alleged housing violations. However, many housing organizers said they are distrustful of the Adams administration, which they see as friendly towards developers and landlords.

Yanny Guzmán, a volunteer with the South Bronx Tenants Movement, said her group focuses on the most vulnerable tenants. All of their volunteers come from the South Bronx and are Hispanic and/or Black, just like most of the tenants with whom they work. Guzmán contrasted their work with that of larger nonprofits, which too often “parachute in” and focus solely on providing legal aid in court, rather than raising community awareness, she said.

“We’re actively building tenant power and tenant agency. We’re giving them the skills, knowledge, and expertise to organize themselves.”

“We’re actively building tenant power and tenant agency. We’re giving them the skills, knowledge, and expertise to organize themselves,” she said.

Reséndiz, who helped organize the tenants at 387 E. 138th Street, emphasized the importance of informing residents about their rights. Under city law, the warranty of habitability requires landlords to make timely repairs, and allows tenants to withhold rent if fixes are not completed. (A number of tenant-led rent strikes gained citywide attention last year.)

Some immigrants were also unaware of their rights under the eviction moratorium. Although the moratorium expired in January, tenants can still be temporarily protected from eviction if they filed an application for the state’s Emergency Rental Assistance Program.

Reséndiz said tenants also need to be taught to be able to read a lease and determine whether their unit is covered under the city’s rent stabilization law. Most buildings with six or more units built before 1974 are subject to rent stabilization, with annual rent increases subject to limits set by the mayorally appointed Rent Guidelines Board. Anyone can check if their unit is rent-stabilized here.

Reséndiz also reminds tenants that under the state’s Property Law 230, all tenants have the right to form an association to advocate for their rights.