BY JULIAN ROBERTS-GRMELA AND TAYLOR JOHNSON 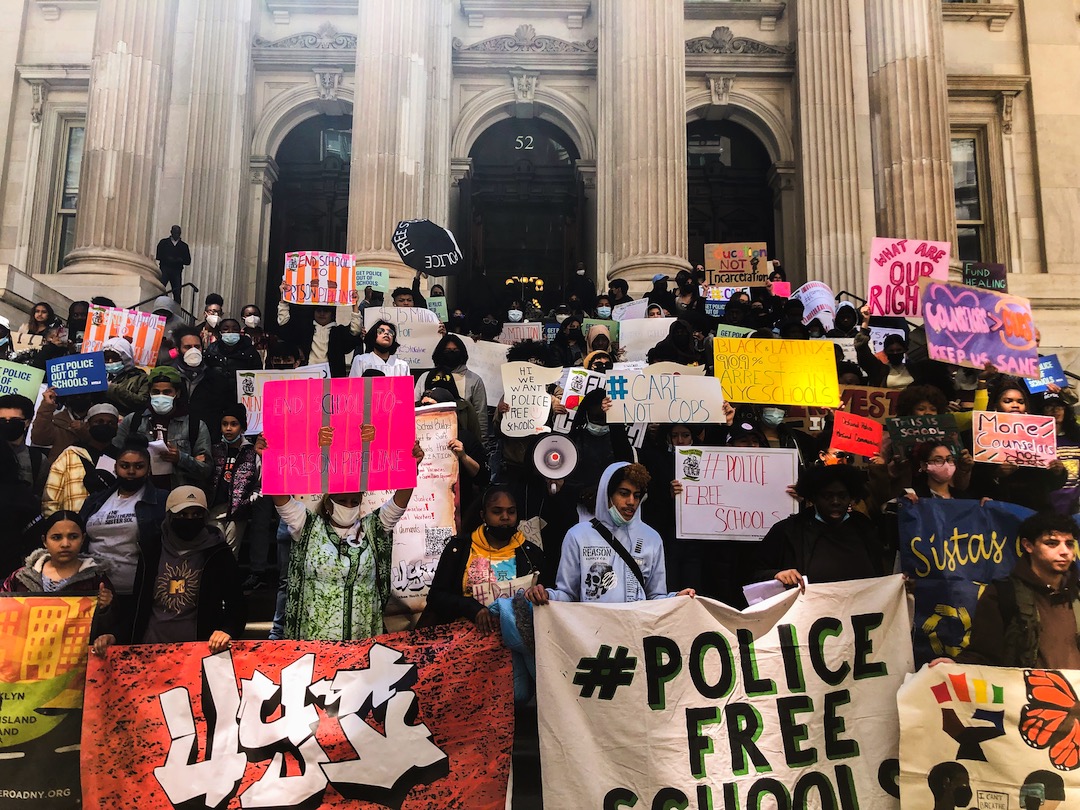 Over 200 students rallied at Tweed Courthouse in April, calling for the City Council to pass a budget that invests more mental health resources for students — and less for NYPD officers in school. Photo by Julian Roberts-Grmela.

Delia Davis, a high school senior in the South Bronx, says that as a young Black woman, she feels self-conscious passing through metal detectors and encountering the NYPD on her way to class.

Given that Black and brown students are arrested in city schools at a disproportionately high rate, Davis says the police presence triggers trauma that distracts her from her education.

“I am constantly worried that the next time, I will be the one who will be interrogated at the door or be searched for looking suspicious,” Davis said. “These are not thoughts I should be having while I’m in school.”

So Davis, along with over 200 other student leaders from across the city, marched on City Hall April 20 to urge the City Council to pass a budget that invests more funding into mental health and directs less money to school police.

“It is not okay that over the last few years, the city has only given us small crumbs for programs that are vital to our lives and education,” Davis said.

Meanwhile, the city’s school safety workforce decreased since June 2020 from over 5,000 employees to under 4,000, according to the Daily News.

Of those 1,000 vacant positions, Adams plans to permanently cut 560 positions, leaving the city with more than 400 safety slots it still plans to fill. The budget the mayor and Council leaders agreed upon includes little new funding for more police and no apparent new money to address mental health issues in schools.

The NYPD’s school safety division — which gets its funds directed from the education budget to the police — is already the largest in the nation.  In Los Angeles — the second largest school district in the nation with just under half the student population of New York — the school safety department employs less than 300 officers.

“Mayor Adams once said public protection can be based on those who say it the loudest. Well, I’m here to say that this kind of narrative is the same kind that is often projected onto Black girls like me, which make us targets at school for unjust harassment by school police.”

“As students, we have a voice,” said one student advocate with the organization Make the Road New York. “In school, they don’t teach us to have a voice so we have to take our voice of our own.”

Black and brown students comprise 66% of the student population in the city but they account for around 90% of school arrests, according to Make the Road New York, which charged high school arrests double the odds of a student dropping out.

“Mayor Adams once said public protection can be based on those who say it the loudest,” Davis said. “Well, I’m here to say that this kind of narrative is the same kind that is often projected onto Black girls like me, which make us targets at school for unjust harassment by school police.”

The New York Civil Liberties Union said policing in city schools, paired with “zero-tolerance policies” in schools, drives youth toward the criminal justice system. The group believe these policing measures harm student learning, especially among those from low-income and Black and brown backgrounds.

Johanna Miller, director of the NYCLU’s Education Policy Center, noted that in 1998 when policing was authorized in city schools, the officer headcount was 3,500.  But that number grew to 5,200 under Mayor Michael Bloomberg, who took office in 2002 and served 12 years.  Meanwhile, enrollment in city public schools is dropping.  Using funds to hire more officers, she said, is wasteful and overexposes students to potential abuse by police.

“Students who have faced two years of isolation, grief, and hardship desperately need support from counselors, teachers, and staff, not policing, arrests, and criminalization in their schools,” Miller added. 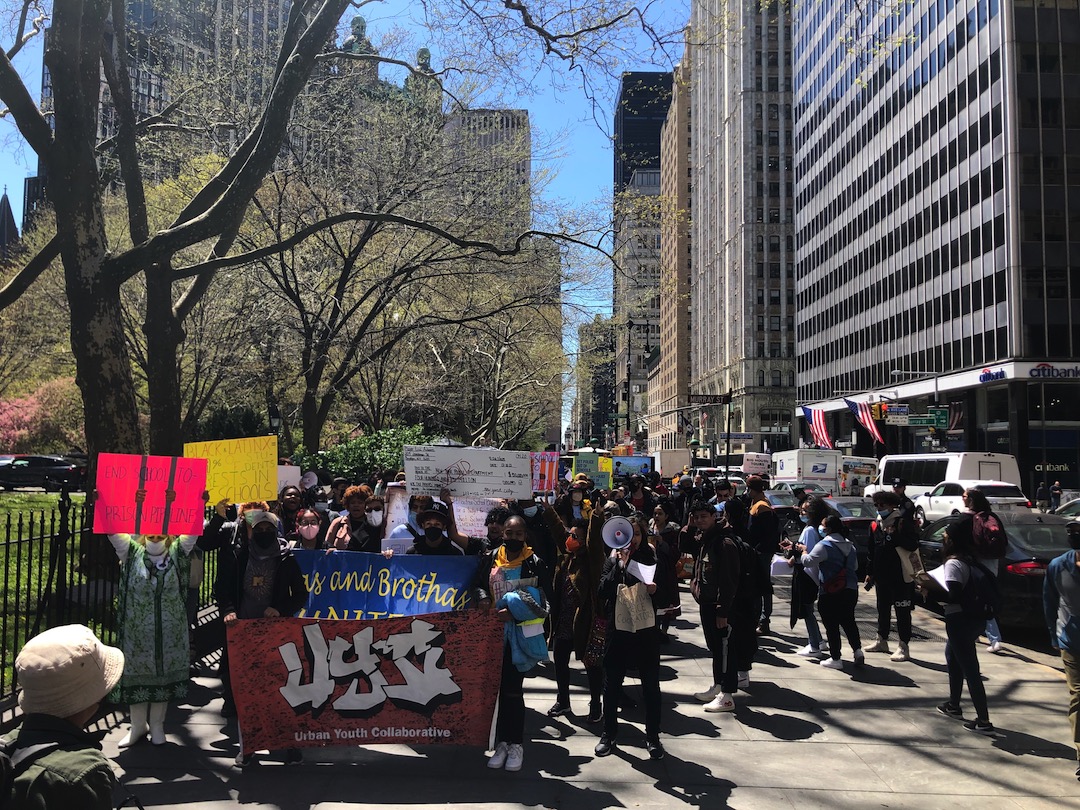 Students march from City Hall Park to the Department of Education’s headquarters at the old Tweed Courthouse, before continuing on to One Police Plaza.

The NYPD did not respond to multiple requests for comment about its school safety division.

Aixa Rodriguez, a middle school teacher and the founder of Bronx Educators for Justice, called for a serious re-evaluation of how to balance school safety issues with the need to provide students more counseling in place of policing.

“The schools need to be built for the children — when the kids are saying this loud and proud as activists and agitating for the things that they need, we need to hear them and make moves,” said Aixa Rodriguez, who is also a steering committee member for Black Lives Matter in Schools NYC .

She said that coming out of a pandemic, which caused one in 200 NYC children to lose a caregiver, the city needs to invest more for teachers and social workers to help teach students to work through conflicts and trauma. Rodriguez believes all students should have advisory classes led by social workers to learn about friendship and managing uncomfortable situations. She said NYPD officers are not having those conversations with students.

Bloomfield concedes that the general electorate might be convinced that school safety officers are necessary to combat a high rate of weapons seizures in schools, attributed to items carried by students for self-protection on their commutes.

“Headlines of weapons and violence galvanize the public’s attention more than the day-to-day work of mental health professionals.”

“I think there’s a difference between the educational community, which probably favors fewer metal detectors and more social services and the general public, which probably cares more about school safety officers,” Bloomfield said. “Headlines of weapons and violence galvanize the public’s attention more than the day-to-day work of mental health professionals.”

“I have a 7-year-old kid, I want to make sure that my son is safe in school,” Salamanca said. “Right now, we don’t have enough public school safety officers in every school. Some of my schools have only one and they have to monitor that school.”

Salamanca said he supports Council Speaker Adrienne Adams’ request that $1.5 billion be added to the budget for “public safety programming,” which he said meant job creation.

“If kids are at work after school, making money or they’re in after-school programs such as basketball, football or baseball, that time is occupied so they no longer have to be in the streets,” he said.

Farah Despeignes — a former teacher at Samuel Gompers High School in Melrose and the president of Community Education Council 8 in Hunts Point — said she believes students need programs to help them learn how to resolve conflicts and communicate.

But, she said, progress will take time.

“We’re not there yet. We have to do the work,” Despeignes said.